Naval architect James S. Krogen once said, “To produce a successful design, you must make an honest determination of how the vessel really will be used and then prioritize every design decision to favor that outcome.” In the case of Kadey-Krogen full displacement trawler yachts, that outcome is a seakindly, live-aboard ocean crossing yacht. Achieving this objective might appear simple enough but it has long been our view that there is often confusion over what “full displacement” really means.

Unfortunately many people tend to think that all full displacement vessels are the same. Nothing could be further from the truth.

“To produce a successful design, you must make an honest determination of how the vessel really will be used and then prioritize every design decision to favor that outcome.”

Longitudinal symmetry refers to the degree to which the stern shape matches the bow shape. A simple way to describe what is desired is that a hull with good symmetry will have V-shaped sections and sharp waterlines at both ends. 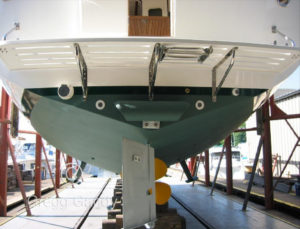 So why do you want a vessel with a symmetrical hull form? There are four compelling reasons.

And fourth, symmetrical forms roll less. Yes, contrary to popular belief, an asymmetrical hull with an immersed transom and/or relatively flat aft sections will actually tend to roll more than a symmetrical hull in a following or beam sea. Why? Simple physics. The leverage (upward force) that wave action has on those flatter sections is greater than on a hull that is more rounded and/or tapered. The upward force on one side creates a downward force on the other side and voilà, you have roll. It is this roll (the downward pressure on the opposite side) that will then cause the vessel to veer off course (yaw). The appropriately symmetrical hull form is much more seakindly than one that is not. Vessels roll and heave as though they are on springs, with less symmetrical forms having stiffer springs (lots of force per immersion) whereas the Kadey-Krogen transom effectively rides on softer springs.

Contrary to popular belief, an asymmetrical hull with an immersed transom and/or relatively flat aft sections will actually tend to roll more than a symmetrical hull in a following or beam sea.

The displacement-to-length ratio (D/L) indicates whether a given displacement is carried over a long waterline length or a short one. It reflects the load the vessel has to carry on a per-foot of waterline basis. Lower ratios tend towards lean and slippery forms with fine ends, and higher ratios tend towards full-bodied and less efficient forms with blunter ends. The lighter the load per foot of waterline length the better the economy and hence the better the range will be. Low D/Ls result from either long waterlines or streamlined underbodies, or a mix of each. Both characteristics serve to improve hull efficiency and therefore fuel economy. Longer waterlines permit higher displacement speeds and streamlined sections result in a hull more easily driven through the speed range. For example, if a given displacement is stretched over a longer waterline, two things happen: The LWL increases (higher hull speed) and the ends get finer and sectional areas less full, i.e. streamlined (less hull drag). Of course, reducing a vessel’s fully loaded weight (displacement) will lower D/L and improve economy but the fully loaded displacement requirement is usually already more or less locked in by the voyaging requirements (living quarters, fuel supply, provisions, etc.).

This long waterline low D/L approach (those in the 260-310 range) can be compared to a bank account earning compounded interest. Reducing D/L yields a more easily driven hull form thereby improving fuel economy and allowing for the use of smaller engines. The improved economy reduces the weight of fuel that must be carried for the desired range and the use of lower horsepower engines will reduce the weight of propulsion machinery. All this weight reduction now results in even greater fuel economy resulting in more weight savings resulting in even better economy, and so the benefits compound.

Interestingly, D/L is often applied incorrectly in the evaluation of long-range trawlers.

Many inaccurate conclusions are made using this ratio. It is important to understand that low D/L does not mean lightweight, or a less substantial structure, or a long and narrow form. How did these misconceptions come to be? Back in the “early days” the market consisted predominantly of shallow flat-bottom coastal craft with insufficient internal volume for the fuel and supplies needed for long-range voyaging. These craft had very low D/Ls. To help bring some clarity to the topic, more than 50 years ago venerable designer and world-voyager Captain Robert Beebe published very useful minimum values of D/L, below which the vessel was said to have insufficient “heft” or carrying capacity for long-range voyaging. Therefore, D/L was used to verify that a vessel had sufficient heft instead of being used to rate hull efficiency. Heft was rightfully considered to be a good thing in that context. And back then, since most boats’ D/L ratios were way under the minimum for long range, the higher the D/L the better. Beebe and other experts agreed that the minimum D/L should be around 260. With many modern passagemakers in the 350+ range, that makes those in the 260-310 range seem “light” and some builders have tried to capitalize on this incorrect assessment.